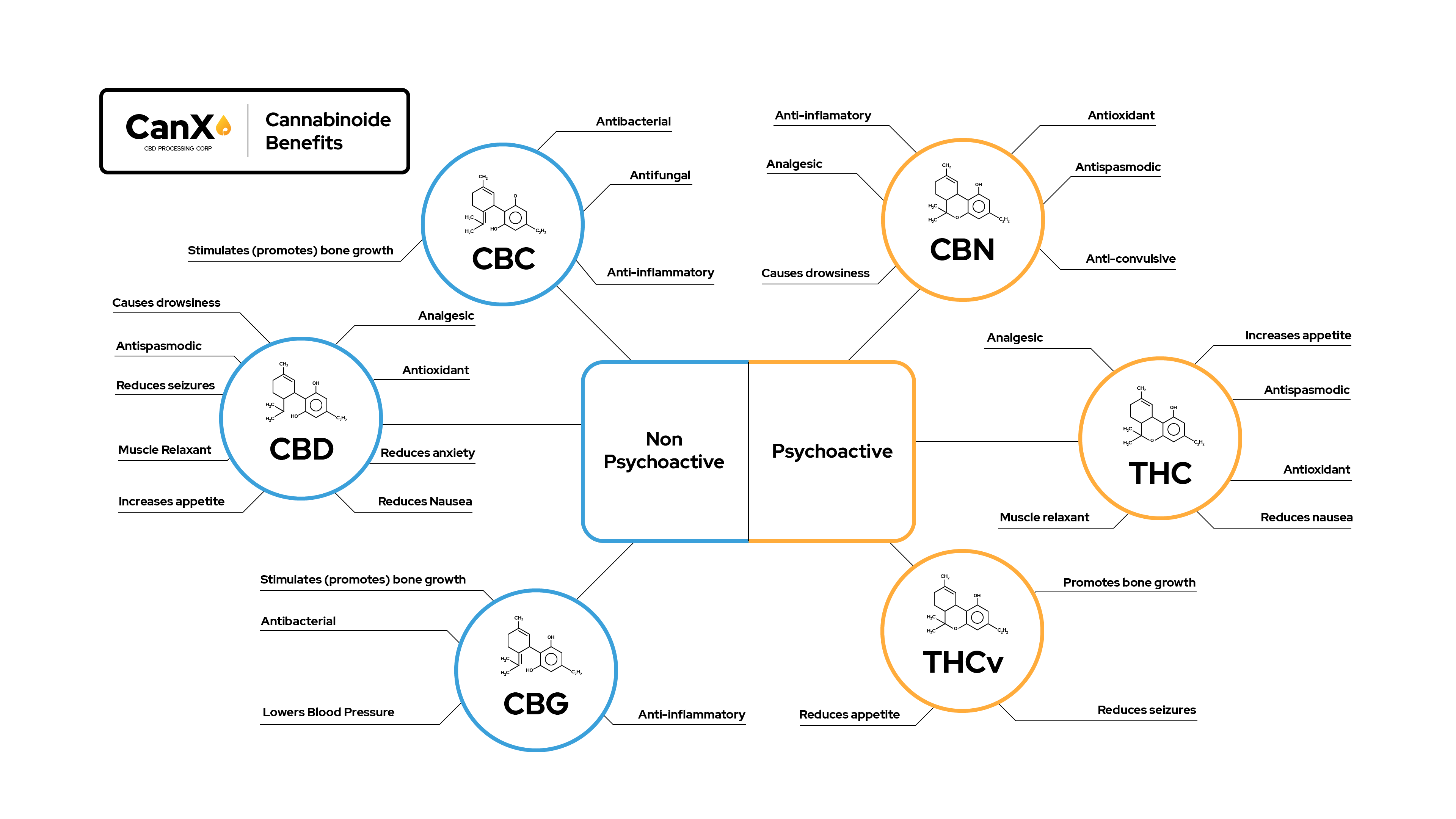 Knowing Your Cannabinoids: The Easy Guide To Identifying Cannabinoids and Their Therapeutic Properties

Cannabis has come a long way from its early days as a banned/prohibited substance. With the help of new scientific data, the plant enjoys a more positive response from consumers worldwide. These consumers value its proposed medicinal effects. The adoption of more relaxed laws and legislation has also helped fuel an increased demand. Because of this, the cannabis industry has grown in leaps and bounds in a few short years.

The industrial uses of cannabis for its fibre – in the form of hemp – is well known. However, the plant also exhibits a variety of interesting influences in the body when consumed. In fact, scientists have identified a slew of unique chemical compounds (cannabinoids) found within the plant. These are the key to unlocking the potentials of cannabis as a medicine. Because of this, there have been many research efforts aimed at demystifying its exact effects and harnessing these properties for our health needs.

While you will readily find ample anecdotal reports on the medicinal benefits of using cannabis or cannabis-infused products, not many people know its source. With this in mind, this article explores the wealth of knowledge that scientists have gathered about cannabinoids. It also explores the myriad of effects and benefits that these particular substances have to offer – with an eye on the business opportunities that they provide.

Cannabinoids are naturally occurring chemical compounds, produced by many biological species. These compounds interact with the body through the Endocannabinoid System (ECS) and can display very distinct influences on the human system. Most importantly, they help to regulate the body’s biological functions and encourage homeostasis – a state of balance in the body’s health.

Endo-cannabinoids: Endo is short for Endogenous (which means internal). Hence, endocannabinoids are natural cannabinoid molecules, produced within the bodies of all living animals. Production occurs in relatively small amounts and these molecules then help regulate essential bodily functions — like the immune system — for the body’s health. Common endocannabinoids found within the body include 2-AG (2-arachidonoylglycerol), and Anandamide that’s named from the Sanskrit word for ‘bliss.’

Phyto-cannabinoids: Phyto means plant in scientific terms. Therefore, phytocannabinoids are cannabinoid compounds that are found predominantly in cannabis and a few other plants. They are primarily concentrated in the resinous glands (or trichomes) of the female flowers. Prominent examples of plant-based cannabinoids are Tetrahydrocannabinol (THC), Cannabidiol (CBD), Cannabigerol (CBG), and host of others.


How Do Cannabinoids Work?

All cannabinoids found in cannabis can exert a direct influence on our internal bodily functions through the Endo-cannabinoid System (ECS). This is is a sophisticated collection of cannabinoid receptors found all over the human body. It is responsible for translating interactions with the different cannabinoids.

The source of marijuana’s effects had remained a mystery until the 1980s. During these years, research into cannabis revealed that cannabinoids bind to specific receptors in the human brain and body. The relationship between cannabinoids and the respective receptors that they attach to simulates that of a lock and key. The ECS receptors act as the locks, and cannabinoids as the keys to unlocking their varied health functions.

Scientists have been able to identify two classes of cannabinoid receptors. Both classes are responsible for helping the body interact with the chemical cannabinoid compounds. They are:

These cannabinoid-sensitive receptors are found mainly in the central nervous system CNS. The CNS consists of the brain and nerves in the spinal cord. Also, they are commonly found in other peripheral organs and tissues such as the gastrointestinal and urinary tracts, the spleen, and white blood cells. Scientists have deduced that CB1 receptors help regulate essential body functions like sleep, pain, appetite, and memory.

This second class of receptors is more commonly encountered within the peripheral nervous system. This includes the spleen, white blood cells, gastrointestinal tract, and the immune system. Research suggests that CB2 receptors are responsible for regulating immune response and anti-inflammatory effects in humans.

Phytocannabinoids: Breaking it Down to Basics

When asked to name their favorite cannabinoid, most cannabis consumers are bound to finger THC and CBD. While these are some of the most well-known cannabinoids today, the bigger picture is much more interesting. Phytocannabinoids (plant-based cannabinoids) found in cannabis, number over 100, and scientists have continued to find more over time.

Interestingly, cannabinoids are not directly produced by cannabis plants. They start as cannabinoid acids concentrated in the plant’s resin glands and require ‘activation’ through decarboxylation (heating). Prolonged exposure to natural elements such as light and air also brings about the creation of other cannabinoids that we will explore in detail.

Researchers have revealed that cannabinoids fall into three (3) broad classes based on their form. These are:

The cannabinoids found in raw cannabis are present in acid-form. They serve as the precursor to all other types of cannabinoids. They are found in varying quantities from plant to plant. Particular strains are bred to contain specific concentrations of these compounds.

CBGA is the most crucial cannabinoid because it serves as a precursor to other cannabinoids. It synthesises these other cannabinoids and is generally referred to as the parent cannabinoid. CBGA can be found in large quantities at the early flowering stages of cannabis plants.

CBGVA also serves as a parent cannabinoid. However, it is slightly distinct from its sister precursor (CBGA) due to the ‘divarinolic acid’ bonds it carries. The compound is later broken down into: THCVA (Tetrahydrocannabivarinic Acid), CBDVA (Cannabidiolic Acid), and CBCVA (Cannabichromevarinic Acid).

CBGVA and its various synthesized forms are notably non-psychotropic. They interact with many receptors in the body. While these compounds show promise, they require more research to unlock their medicinal effects.

THCA is an acid form cannabinoid. It’s synthesized from the parent precursor cannabinoid. It is non-intoxicating and shows promise in some medicinal applications.

CBCA is a decarboxylated cannabinoid found in young cannabis plants. It has been discovered to contain a myriad of beneficial effects and demonstrates an impressive ability to induce cell death. This makes it a viable candidate for eliminating cancer cells.

Precursor cannabinoids synthesise CBDA when CBGA is decarboxylated. Unlike other cannabinoids before it, not much about it has been figured out. It has an unstable chemical structure.

When heated, raw plant cannabinoids in acid form undergo a decarboxylation process. The precursor cannabinoids decompose into the more natural cannabinoids that are well-known.

There are two chemical forms of THC. This (Δ9-THC) is the stronger and more popular of the two. THC is without argument the most famous and well-documented cannabinoid, being one of the first discovered. It is potently psychotropic and, as such, induces psychoactive effects of euphoria and bliss. Furthermore, it readily interacts with CB1 and CB2 receptors in the ECS (Endocannabinoid system).

CBD is the second most prevalent cannabinoid. It is rapidly gaining ground as the more favoured compound for human consumption. This is primarily owed to the fact that it is entirely non-psychoactive. It binds with CB-2 receptors in the brain and ECS and offers many medicinal benefits.

CBG draws the attention of scientists and consumers alike, due to its non-psychotropic nature. It weakly binds to CB1 and CB2 receptors and displays several medicinal properties.

CBC is notably non-psychoactive and has several well-established health benefits. It also displays other beneficial properties when combined with other cannabinoids. It contributes immensely to other cannabinoids’ entourage effect.

THCV is a psychoactive compound cannabinoid. It can be found in Sativa dominant cannabis varieties but with milder effects — about one-fifth as psychoactive as THC.

CBDV, CBGV, and CBCV have synthesized cannabinoids from their divarinolic acid precursors. They are not yet well known; however, researchers are expanding their queries to discover what promises these unique substances hold.

The last class of cannabinoids is only formed when other activated cannabinoids have exposure to light and oxygen for prolonged periods.

Delta-8-THC is closely related to the more popular THC that many consumers know and love. However, early research shows that this cannabinoid is less intoxicating and could have useful medicinal value with its pain relief properties.

CBN forms when THC cures for long periods. It readily binds to both CB1 and CB2 receptors but has a higher affinity for the later, implying that it has more potent functions in the immune system.

To the best of our knowledge, there isn’t any published research on the effects of CBL, CBLA, and CBNA yet.

Cannabis contains well over 100 cannabinoids and research continues to uncover new ones. Additionally, the plant contains other active compounds such as terpenes and flavonoids. These bind to our cells and exert their unique influences. All these cannabis-derived compounds work in synergy, magnifying, or diminishing each other’s effects in intricate interactions. This complex network of interactions is the Entourage Effect (or Ensemble Effect).

For example, the terpene myrcene can reduce the blood-brain barrier, allowing cannabinoids to pass through easily with more intense effects. Linalool and limonene are also potent terpenes that combine with CBD to help fight acne. Scientists continue to find evidence of such unique synergistic interactions, but the exact mechanics remain unanswered.

Cannabis, as a consumer product, continues to gain grounds on the global market. Also, demand keeps soaring as more research is being made to uncover its many benefits as a medicinal alternative fully. However, cannabinoids are the real sources of these many benefits. The cannabis industry is responding to the demand of customers for specific cannabinoids (e.g., the burgeoning CBD market)

The benefits of the entourage effect reinforce the choice of whole plant (full-spectrum) cannabis medicine over Isolate cannabis products. This is because the mix of cannabinoids tend to produce better results, opening up unique opportunities for the marketing of products with specific cannabinoid combinations that cater to consumers’ direct needs. Therefore, cannabis companies looking to take their business to the next level will do well to ally with manufacturers of quality cannabis-extracts. They can provide products with specific cannabinoid concentrations.

CanX CBD corp employs cutting-edge extraction and filtration techniques, which let us provide our clients with Isolate, full-spectrum, and broad-spectrum cannabis products, tailor-made to contain specific concentrations of select cannabinoids. Would you like to find out more? If so, head on over to our product page for your unique selection of cannabis extracts for your business.

Keep up to date with CanX CBD news.